The Republic of Korea is the southern part of the Korean Peninsula with a population of 51 million people within 39,000 square miles of diverse landscapes of mountains, valleys, narrow and broad coastal plains, river basins, and rolling hills. With four distinct seasons, the ideal time for touring is in spring and fall. You may wish to catch the cherry blossoms in April or fall foliage in October-November. The Three Kingdoms of Korea – Gogoseon, Silla and Balhae – were unified in the 7th century and then ruled by two major dynasties until the Korean Empire of the 20th century was annexed into the Empire of Japan in 1910. Japanese rule concluded with the end of World War II and Korea was divided into two zones which ultimately became the Republic of Korea and North Korea.

South Korea is a highly developed country with the world’s tenth largest economy. It has notably one of the fastest internet connection speeds and an excellent highspeed railway network. The country is famous around the world for its pop culture, especially in music.

Lakani has been working in South Korea for decades and will create the perfect custom vacation for guests of all interests, be it a honeymoon, a family reunion, or a long-awaited vacation.

Begin in the gleaming capital, Seoul, where grand royal palaces, charming traditional villages, art galleries, and street markets await. Take a unique trip to the demilitarized zone on the border of North Korea. Board the express train to Gyeongju, the former capital of the Silla kingdom that ruled the Korean Peninsula for over 900 years, known as ‘the museum without walls’ for its collection of antiquities. Stay in Busan, home to one of the world’s busiest ports. Its fish market is worthy of a visit as is the scenic Haedong Yonggungsa Temple and the beautiful culture village. Fly to Jeju Island for a fabulous finale to your journey through Korea. In addition to walks to see the coast and waterfalls with impressive temples lava tubes, enjoy the works of French Art Nouveau artists at a stunning art gallery. Your experience is sure to be truly remarkable.

Lakani World Tours can create a travel itinerary best suited for you – depending on your time, interests, and budget. 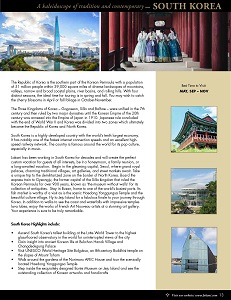