The Japanese prefecture of Okinawa includes over 150 islands in the East China Sea between Taiwan and mainland Japan. The largest island of the group, known as the Ryukyu Islands, is Okinawa, named after the prefecture and, at roughly 466 square miles, it is the smallest of the five main islands of Japan. Evidence shows that the islands were inhabited during the Early Shell Mound period, over 5000 years ago. Following World War II, Okinawa became an important site for US military bases, of which there are 32 on the island. Consider this all year subtropical island addition to your Lakani Japan itinerary.

Japan’s northern prefecture of Hokkaido is home to its second largest island by the same name. Over 15,000 years ago, during the Joman period in Japanese pre-history, the inhabitants of Hokkaido were hunter-gatherers. It is generally believed that the indigenous Ainu people’s spirituality originated during the Joman period when they believed in natural spirits. Throughout the centuries, the lifestyle became more agricultural, and trade ensued with the south. When Russia seemed to be a threat, the Tokugawa shogunate took control and during the Meiji Restoration, Hokkaido became the official name of the island and eventually the prefecture. Its natural beauty, abundance of National Parks, and culture make it an attractive addition or stand-alone program for any Lakani visitor to Japan.

Lakani World Tours can create a travel itinerary best suited for you – depending on your time, interests, and budget.

This island prefecture is a year round destination, well known for its annual snow festival in the capital city of Sapporo. Among the island’s mountains are a few that are lookalikes to Mount Fuji, and many locations offering winter sports. Spring flower fields and autumn colors also offer breathtaking scenery. The small harbor city of Otaru’s preserved canal, herring mansions and old warehouses offer a picturesque view of its early days as a fishing port. Hakodate at the island’s southern tip is known for delicious seafood and Goryokaku Park a former star-shaped fort surrounded by a moat. 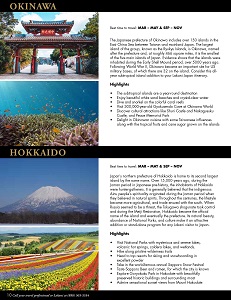