A massive island nation off the southeast coast of Africa, Madagascar is home to thousands of animal species found nowhere else – lemurs being the most famous, and most appealing. Often called the “eighth continent” by ecologists, this unique island also offers beaches, deserts, and forests – rainforests and spiny forests with ancient Baobab trees. The people are a mix of Malayo-Indonesian, African and Arab, but since the French colonized it in the 16th century, French, along with Malagasy are the spoken languages. The climate is generally tropical yet temperate; with November to April being more hot and rainy, and May to October being cooler and drier.

Madagascar is for adventurous nature-lovers who appreciate unique flora and fauna, as well as unusual rock formations and exotic reserves. The highlights are spread all around the island – The center is characterized by highlands, the east coast is covered in rainforest, the west is open savannah, and the southern tip is semi-desert. The capital of Antananarivo (“Tana”) has the only international airport; stop-overs here are often required when traveling between different sections of the country.

Madagascar can be a destination itself, or an addition to any African journey. Lakani World Tours can create a travel itinerary best suited for you – depending on your time, interests, and budget. Here are the main locations we recommend:

Antananarivo – the capital, located in the middle of the island with expansive and enchanting markets.

Analamazaotra Reserve – “Perinet”, is on the east coast. It is famous as the home of the babakoto “indri” lemur – the largest living lemurs known for their unique haunting call. The forest also shelters sifaka, grey bamboo lemurs, brown lemurs, and the Madagascar tree boa.

Berenty Reserve –on the southeastern tip of the island with three different ecosystems: the southern “spiny thicket” forest, the wet rainforest, and a transitional forest in-between. Each host different lemurs (maki, sifaka, Microcebus and even aye-aye). Other unique sites include baobab trees, rare three-cornered palms and funerary art of the Antandroy ethnic group

Diego-Suarez – a port on the northern tip of the island featuring an eclectic mix of architectural styles reflecting its myriad of influences. It is a gateway to the lush national park of Montagne d’Ambre and Ankarana, noted for stunning limestone pinnacles known as the “Tsingy.” Explore bat caves and intimately mingle with crown lemurs. 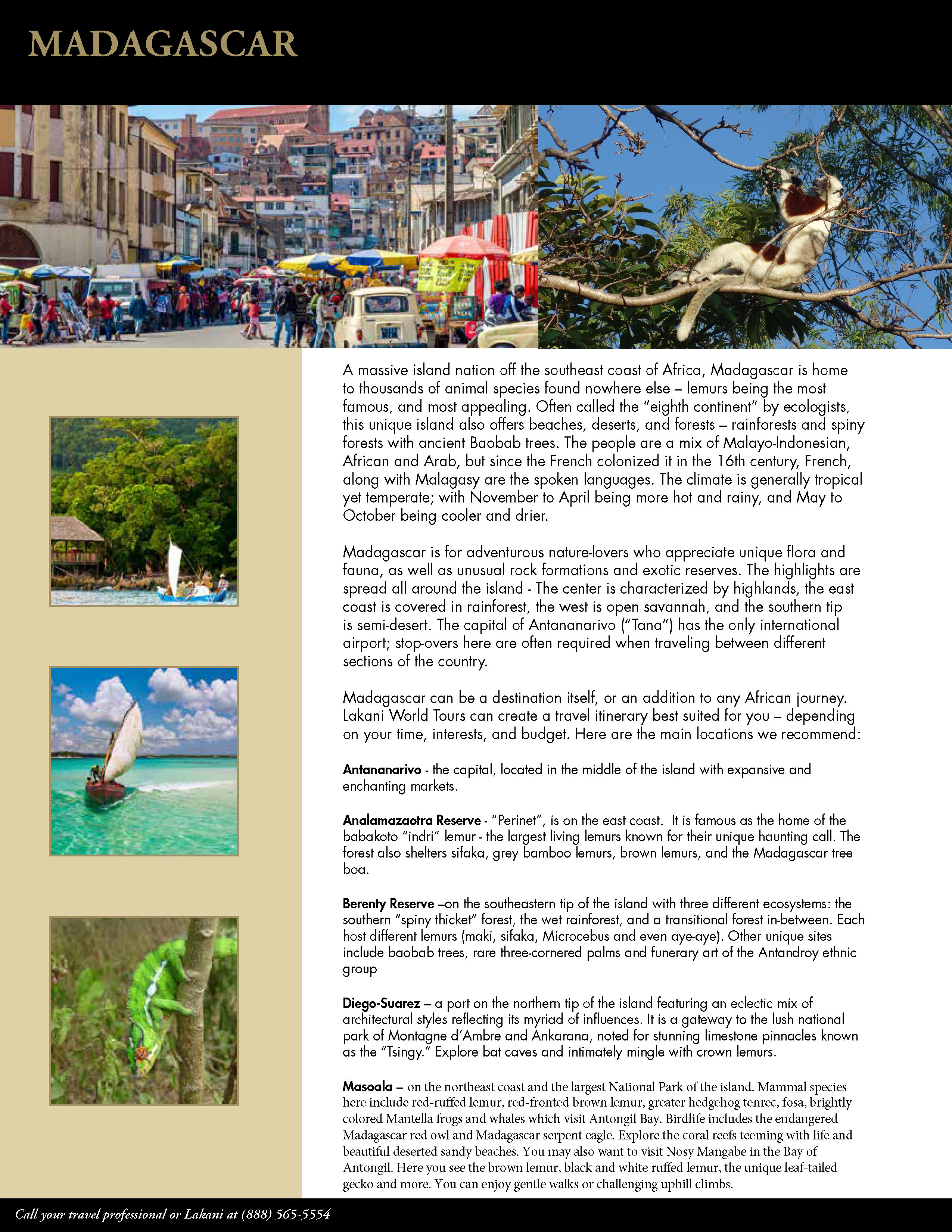