Easter Island (Rapa Nui) is on the must-see list of every world explorer – because of its unique history, remote, isolated location, and mysterious archaeological sites. Its famous statues (moai) are attributed to the island’s 13th – 16th century inhabitants, but how and why they stand in such a remote geographic location is the stuff of legends. Even Easter Island’s location has a bit of mystery – sitting 3000 miles from the South American mainland, Easter Island is part of Polynesia, yet a Chilean territory. Isolated from the rest of the world, the inhabitants developed their own culture, religion, and lifestyle to thrive in the volcanic terrain.

Easter Island is a volcanic island known for its intriguing archaeological sites. There are approximately 900 monumental statues called moai, created by the early Rapa Nui inhabitants during the 10th-16th centuries. In 1995 UNESCO named Easter Island a World Heritage Site, with much of the island protected within Rapa Nui National Park. The moai are carved figures with oversized heads, often resting on massive rock altars.

Polynesian people most likely settled on Easter Island sometime between 700 to 1100 AD, and created a thriving and industrious culture as evidenced by the island’s numerous enormous stone moai and other artifacts. By the time of European arrival in 1722, the island’s population had dropped to 2,000–3,000 from an estimated high of approximately 15,000 just a century earlier. European diseases and Peruvian slave raiding in the 1860s further reduced the Rapa Nui population, to a very low number of inhabitants in 1877.

Easter Island is accessed by a 5-hour flight from Santiago, Chile – flights run about 2-3 times a week. Visits are most commonly added to a trip to Chile and/or Argentina, though exploring Peru and Easter Island works well too. Accommodations on the island are comfortable but basic and limited – so early reservations are advised. The usual visit last 3-5 days; staying at one resort location and taking day excursions to the various points of interest. Lakani World Tours can create a travel itinerary best suited for you – depending on your time, interests, and budget.

Begin your exploration with a stop at Rano Kao, one of three extinct volcanoes on the island whose crater is pocked with over 100 small lakes. Rano Kao was the second of the three volcanoes to erupt about 2.5 million years ago. Growing inside the crater are grapes, bananas, and totora, a reed used extensively for houses, boats and other uses.

Visit Rano Raraku, one of the most interesting archaeological sites not only on Easter Island but also in the entire world. Here you can find 396 moai in the quarry, which is an extinct volcano that has an amazing fresh water crater. Some of the statues are still encrusted in the rock of the quarry, never to be moved. Others are in a process of getting their backs finalized and highlighted and some are in the “staging area” waiting for the moving crew to bring the moai to its destined ahu. You will also see the largest moai ever carved, Te Tokanga or El Gigante, which measures a staggering 66 feet and weighs an estimated 220 tons.

From the vantage point at Orongo, the curvature of the earth can be seen with an unending vista of the ocean. Orongo was restored in 1974 by William Mulloy, who reconstructed 47 houses, many of which had collapsed or had been torn down by treasure hunters. He also established the first set of trails through the site. 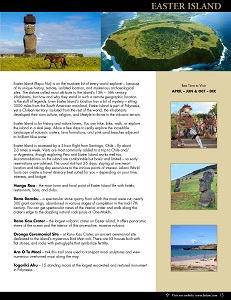