Choose to go on your own or be accompanied by a Lakani Tour Manager.  The choice is yours with a Lakani Custom Made Journey.

Set on the Balkan Peninsula with both Adriatic and Ionian coastlines, Albania has a beautiful location, hospitable climate, and rich history. This small mountainous country boasts many castles and archaeological sites that are just beginning to be re-discovered. Wander the Albania Alps offering incredible scenic vistas, then, in contrast, relax on the Albanian Riviera featuring crystal clear waters, unspoiled beaches, and picturesque villages – the Mediterranean coastline as it once was. Until the late 20th century the country was closed to outsiders, making it a fascinating place to discover today.

Albania can be a destination itself, or it is often combined with other Eastern European countries such as Croatia, Serbia, Macedonia or Greece. Lakani World Tours can create a travel itinerary best suited for you – depending on your time, interests, and budget.

Lakani World Tours can create a travel itinerary best suited for you – depending on your time, interests, and budget. Here are just some suggestions on what your holiday can include:

A capital city at a crossroads – see constant reminders of the isolationist days juxtaposed to increasing harbingers of Albania’s modern future, including a busy nightlife scene. Major city sites include the grand frescoed Ethem Bey Mosque and its colossal clock tower, an emblem of the city, and sprawling Skanderbeg Square with its National History Museum with exhibits spanning from antiquity to post-communism. Concrete bunkers from the cold war era are finding new life, such as Bunk’Art 2, a museum illustrating the history of communism during the 20th century. Uncover hidden secrets of the notorious National Intelligence Service at the House of Leaves museum. And ascend Mt. Dajt for a magnificent view of the city.

The largest port on the Adriatic and one of Albania’s most ancient cities. See the impressive ruins of a Roman amphitheater in the center of town and visit the ultra-modern Durrës Archaeological Museum with its breathtaking collection of historical artifacts.

A hilltop town with a plethora of ancient houses, winding stone paths, and magnificent vistas. Set on the banks of the River Osum, it is a UNESCO World Heritage Site, often called the “City of a Thousand Windows” for its striking and unique Ottoman/Albanian architecture. Explore the fortified and well-preserved castle, that has residents still living inside its protective walls.

A UNESCO city in southern Albania, known for its unique Ottoman period architecture, and its large eerie hilltop castle, one of the biggest in the Balkans. It is also the birthplace of former communist Leader, Enver Hoxha, as well as Albania’s most internationally famous author, Ismail Kadare, whose homes are now museums.

Other cities to visit include Kroja, an ancient mountain city. Vlore, a seaside city that was the site of Albania’s 1912 independence from the Ottoman Empire. Saranda, the southernmost town on the Albanian coast.

Albania can also be combined with Croatia, Macedonia or Greece among other countries in the area. 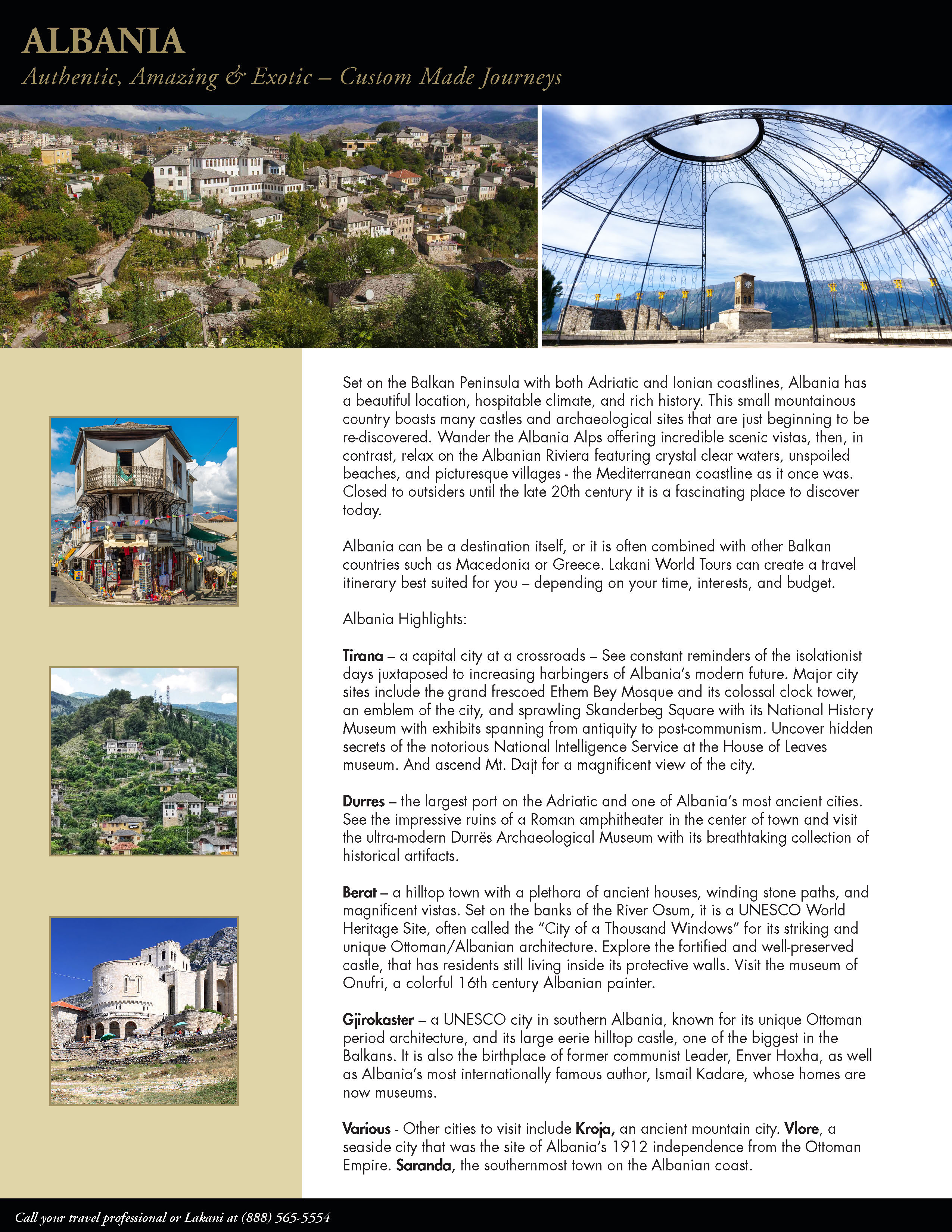