Accompanied by a Lakani Tour Manager, discover the astounding architecture and picturesque coastal cities of Sicily.

Join your Lakani Tour Manager on a thrilling discovery journey of Sicily. Uncover ancient Greek history at impressive archaeological and UNESCO World Heritage Sites. Explore Norman and Baroque architecture in historic hill towns. Sample exquisite cuisine and wines. Experience one of Europe’s highest and most active volcanos. Travel in seamless comfort without a care in the world and enjoy these unforgettable gems of Sicily.

VIP service on arrival and departure

Arrive Palermo where you will be met and transferred to your luxury sea view accommodations. Meet your fellow travelers and Lakani Tour Manager at a welcome cocktail and dinner party.

Tour Sicily’s capital city and see its most important sights, including the 12th century Palermo Cathedral and Royal Palace. Visit the historic hill town of Monreale for lunch and step inside the impressive Duomo. Journey to Erice and take the cable car from Trapani to discover the ancient town. Enjoy a private Marsala wine-tasting and lunch, followed by a cannoli demonstration before driving to Segesta to see its well-preserved Doric temple. Arrive in Agrigento and relax in your deluxe room overlooking the Valley of the Temples.

Explore the Valley of the Temples with your expert guide and learn about this splendid archaeological site dating from the 5th century BC. Drive to Piazza Armerina, known for its Roman villa with exceptional mosaics.

After lunch, continue to Ragusa. The 4000-year-old ancient city is part of a Regional UNESCO World Heritage Site. Explore it’s many historic churches and Baroque buildings on a guided walking tour. Visit the Palazzo Arezzo di Trifiletti followed by a drive to Modica to see its Church of San Giorgio. Indulge in a chocolate-making demonstration before returning to your hotel.

Drive to Siracusa, a 2700-year-old UNESCO World Heritage Site that is home to an extraordinary collection of archaeological treasures. After lunch, take a walking tour of Ortygia Island and see its historical landmarks before continuing to Taormina and your luxurious sea-view accommodations.

Take a funicular ride up Mount Etna for superb views of its craters and summit. Stop for lunch at the local winery before returning to Taormina in time for a walking tour of the hilltop town.

Cross the Strait of Messina to Reggio Calabria to see the remarkable ancient Riace Bronzes at the National Museum of Greater Greece and explore the city. Enjoy a full day at leisure to further explore the charming town, take in the stunning sea views from your hotel or indulge in a treatment at the wellness center. Gather with your traveling companions and newfound friends for a farewell cocktail party and dinner.

Catch your final views of the beautiful Sicilian landscape as you are transferred from Taormina to Catania Airport to board your departure flight home or to your onward destination. Arrivederci! 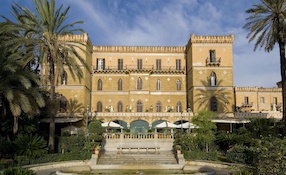 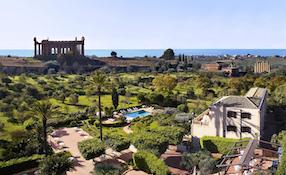 A magnificent residence of the late 18th century, this 5-star hotel is within UNESCO’s Archaeological Park of the Valley of the Temples. Deluxe Room. 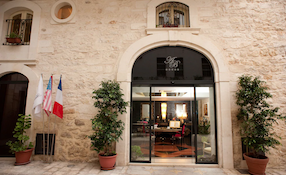 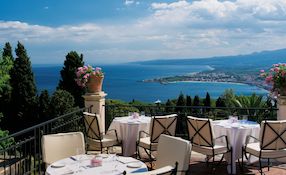 Set in the heart of Taormina with beautiful views that have enchanted people for more than a century. Deluxe Seaview Room. 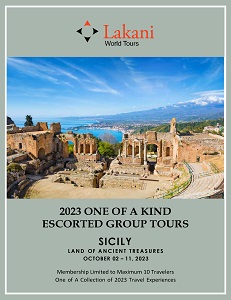