Join your expert Lakani Tour Manager and an exclusive group of like-minded travelers as you step back in history and follow the trails of the ancient Jews, Romans and Nabaeteans on this fascinating tour of the Middle East.

Step back in history and be inspired and transformed as you discover ancient cities, churches, synagogues, temples, and more on your journey through Israel and Jordan. See Roman and Crusader ruins in Caesarea and Akko. Sail across the Sea of Galilee; admire the Mount of Beatitudes and antiquities in Capernaum. Explore the walled Old City of Jerusalem; tour the Church of the Nativity in Bethlehem; visit the Qumran Caves; and ascend the cliff of Masada. Cross the Allenby Bridge to Jordan and walk the impressive Roman ruins at Jerash. Walk through the Siq of Petra to the Treasury. Relax in the therapeutic waters of the Dead Sea. Capture memories to last a lifetime on this unforgettable adventure. 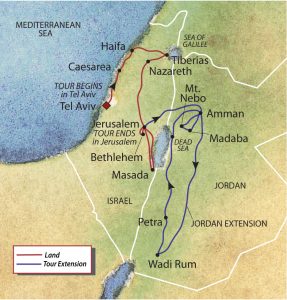 VIP service on arrival and departure

Arrive Tel Aviv where you will be met and transferred to your luxury hotel overlooking the Mediterranean Sea. Settle into your sea view room and perhaps step outside of your hotel and walk along the promenade and take in the sea air.  Join your fellow travelers and Lakani Tour Manager for cocktails and dinner the first evening.

Visit the unique Ayalon Institute, a former underground ammunition factory that was disguised as a Kibbutz that ran a laundry service.  Learn about the culture and history of Jaffa on a guided walking tour, including an encounter with a local artist.

Enjoy a scenic coastal drive north and explore Roman and Crusader remains in Caesarea and Acre.  Admire the stunning gardens of the Baha’i World Center, an UNESCO World Heritage Site.  Continue to Tiberias on the coast of the Sea of Galilee.  Cross the sea by boat and see the Mount of Beatitudes and Capernaum.  Drive up the Golan Heights to Tel Dan.  Visit the ancient cities of Megiddo, Beit She’arim and Sepphoris.

Tour the ancient city of Beit She’an, believed to be one  of the oldest in the region from the Copper Age, over 5000 years ago.  Visit the kibbutz of Beit Alpha.  Continue down the Jordan Valley and see the Mount of Temptation, Gilgal and St. George’s Monastery en route to Jerusalem.

Explore the historic sights inside the walled Old City of Jerusalem, including the Church of the Holy Sepulcher, Dome of the Rock and Western Wall – connecting the Christian, Muslin and Jewish faiths all in one place.  The city along with its walls are a UNESCO World Heritage Site.

Venture into the Judaean Desert to the archaeological site of the Qumran Caves, where the Dead Sea Scrolls were discovered.  Continue to ancient fortification of Masada overlooking the Dead Sea.  Take a cable car to the summit for unforgettable views and a closer look at the ruins.

In Jerusalem’s New City, step inside the Israel Museum to view the Dead Sea Scrolls.  See a moving presentation at Holocaust History Museum in the Yad Vashem Memorial Complex.  Take an excursion to Bethlehem and stop at the Shepherd’s Field on the way.

For those with limited time: You will be transferred to the airport to return home today with insightful memories of Israel.

Continuation to Jordan: Bid farewell to Israel this morning as you travel overland via the Allenby Bridge to Jordan and its capital city, Amman where your luxury hotel accommodations await.  After lunch, discover the “White City” as Amman is often referred to because its buildings are constructed with local white limestone.  View the Citadel and Roman Amphitheater.  Continue to the ancient city of Jerash, whose constant human occupation spans more than 6,500 years.  It is one of the best preserved Roman provincial towns in the world.  Stroll the colonnaded streets to explore the soaring hilltop temples, spacious public squares, baths, fountains and city walls with towers and gates.

Depart Amman and drive south into the desert to Wadi Rum, also known as the Valley of the Moon.  Climb aboard a Bedouin 4×4 jeep for your tour of this timeless place that is a maze of monolithic rock formations rising from the desert floor that has remained virtually untouched.  In the early 20th century, British officer T.E. Lawrence described it as “a processional way greater than imagination.”  It is a perfect setting for many films since Lawrence of Arabia was filmed on location here over 50 years ago.

Continue your journey to the Red Rose City of Petra.  Your hotel is just steps away from the UNESCO World Heritage Site.  Enter the city through the East Siq, a gorge that leads to the remarkable Treasury.  Spend the whole day exploring the rock-cut architecture of the Royal Tombs and discover the importance of the innovative water conduit system of the ancient Nabataean capital that made the city prosperous.

Depart Petra and drive north to Madaba and St. George’s Church where you admire one of the most important surviving mosaics of the Byzantine era.  The Madaba Mosaic Map sits on the floor of the church and was only uncovered during construction of the church at the end of the 19th century.  Created in the 6th century, the mosaic was once a detailed map of Holy Land sites in present day Jordan, Israel, Palestine Territories and Egypt’s Sinai Peninsula.

Continue to nearby Mount Nebo whose reference in the bible is the place where Moses viewed the Promised Land.  Then proceed to the Dead Sea, at 1,345 feet below sea level, it is the lowest place on Earth.  Settle into your luxury hotel on the edge of the Dead Sea, a large inland lake with the saltiest water anywhere in the world, almost six times as salty as ocean water.  Relax as kings, queens and celebrities have for generations, enjoying the sea’s therapeutic properties.  Gather for a farewell cocktail and dinner party with your fellow travelers and Lakani Tour Manager and share your insights gained on this fascination adventure.

Bid farewell to newfound friends as you depart the Dead Sea and transfer to the Amman airport for your flight home or onto your next destination. 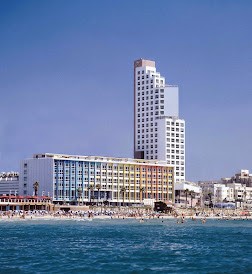 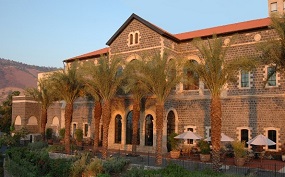 This boutique hotel, located on the shore of the Sea of Galilee in Tiberias, is one of the most prestigious hotels in northern Israel. Antique Room. 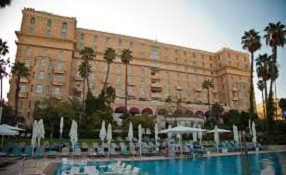 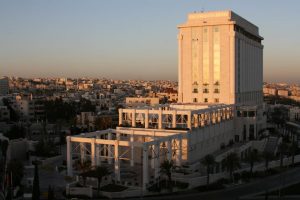 A crown jewel in the heart of Jordan’s bustling capital city, set atop the tallest of Amman’s seven hills. Premium Room. 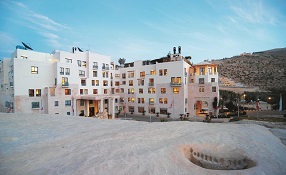 Directly at the entrance to the historic city of Petra, your accommodations are filled with Middle Eastern fabrics and textures. Junior Suite. 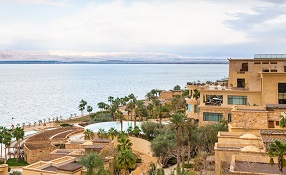 Situated on the edge of the Dead Sea with a luxury spa that provides relaxing experiences infused with its rich minerals. Ishtar Deluxe Room. 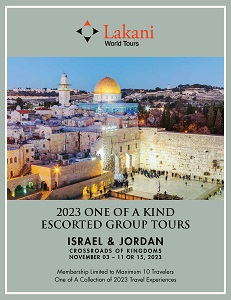