Arrive in Austria’s capital city, Vienna.  You are assisted at the airport and transferred to your renowned hotel in the city center.  Settle into your suite and perhaps take a walk around this historic hotel.  Meet fellow travelers and your Lakani Tour Managers at an evening cocktail and dinner party.

Drive along Vienna’s Ringstrasse, the 3 mile masterpiece in urban planning, that took over 50 years to complete and features many landmarks.  Disembark the bus near the beautiful Opera House and visit the Imperial Crypt of the Habsburgs, where over 150 of the famous family are interred.  Step inside the nearby Hofburg Palace and enjoy a private tour of the Imperial Treasury.

After lunch, go back in time and climb aboard a horse-drawn carriage and immerse yourself in the city’s history in the narrow winding alleys and cobbled roads of Vienna’s old town.

Board the Lakani Private Jet and enjoy your first flight aboard the jet to Tivat, located on the scenic Bay of Kotor in the southwestern region of Montenegro.  Transfer to your hotel in Porto Montenegro, just 10 minutes from the airport.  Spend the rest of the day at leisure, taking in the sea views from your suite, and becoming acquainted with the acclaimed yachting village and haven to motor launches to super yachts.

Continue along the Bay of Kotor to the walled city of Kotor, an UNESCO World Heritage Site.  Step inside the Cathedral of St. Tryphon.  Gain insight in the city’s nautical history at the Maritime Museum with an exclusively guided tour by its curator.  Take a boat cruise on the bay before lunch in Kotor.

Enjoy an excursion to Cetinje, the former royal capital of Montenegro and currently home to the country’s president.  Walk the town to St. Peter’s Monastery and continue to the Museum of King Nikola for a private tour by the curator of the museum.  Enjoy lunch at a local Estate before returning to the hotel.

After breakfast, bid farewell to Montenegro and take our private jet south to the Peloponnese in Greece.  Arrive Patras and transfer to the golden beaches of the Riviera Olympia where your villa with private pool awaits.

Visit the medieval castle of Chlemoutsi built by the Franks in 1220.  Located on an irregular plateau on top of a hill, its architecture is impressive, and the views extend across the coastal plain of Elis and the Ionian Sea to Zakynthos and beyond.  Continue to Patras, settled 3000 years ago.  Explore the ancient sites, including the Mycenaean cemetery of Voudeni.

Tour the archaeological site of Olympia and see its famous antiquities, including the Altis, Temples of Zeus and Hera, and the Nymphaeum.  Visit the Museum of Olympia and the stadium before returning to the hotel for lunch and an afternoon at leisure to enjoy the resort.

Travel by Lakani Private Jet to Mostar, Bosnia and Herzegovina. Tour the city and see its most famous landmark, Stari Most, the old medieval arched bridge that spans the Neretva River which is an UNESCO World Heritage Site. Discover the Byzantine, Ottoman and Slavic influences as you explore the city.

Re-board the jet and continue across the Adriatic Sea to Bologna, the capital of Emilia-Romagna, a region long been considered the Cradle of Italian cuisine.

Begin your exploration of Bologna with a shopping trip to the local market with your local hostess.  Learn how to make pasta from an expert followed by lunch in a private home.  Work off your lunch with a walking tour of Bologna’s historic center and admire the medieval Asinelli Tower, a symbol of Bologna for 900 years that stands over 318 feet high.  Visit the impressive Anatomical Theatre of the Archiginnasio with its remarkable ceiling and wall decorations, carvings and its ornate anatomical table where university students from the 16th-century would have learned about human anatomy and surgery.  Tour the unique Santo Stefano Basilica complex and then end the afternoon inside the 13th-century Church of Santa Maria della Vita.

Drive to Modena and get a thrill as you enter the Modena Racetrack (Autodromo di Modena) and be driven in a Ferrari, with the engine being pushed to the limits.

After lunch, stop in Maranello to visit the Enzo Ferrari Museum, where you will see an exhibition of Ferrari cars and memorabilia owned by Enzo Ferrari.  On your way back to Bologna, you’ll have a chance to sample balsamic vinegar at a local producer.

Board the Lakani Private Jet for your final leg to Biarritz on the Basque coast.  See the Madonna of the Rocks and Grande Plage on your tour of the city.  Venture to the nearby city of Bayonne for a light reception and entertainment by a Basque choir.  Enjoy a gourmet lunch in the Michelin starred restaurant, Auberge du Cheval Blanc followed by a walking tour of Bayonne.

CHOOSE YOUR DAY ON WEDNESDAY

SAN SEBASTIAN – Drive to St. Jean de Luz to visit Maison Louis XIV and the Basque church. Continue to Spain and ascend Monte Igueldo funicular for a panoramic view of the picturesque coast and San Sebastian. Descend into the town for a gastronomic experience – a Tapas rally lunch where you’ll dine at three tapas bars.

BILBAO & GUGGENHEIM MUSEUM – Travel south to Bilbao, Spain, home to the famous Guggenheim Museum designed by Frank Gehry. The iconic building is one of the most admired works of contemporary architecture. Learn about the building and the collection of modern art from a specialized museum guide.

Reminisce with fellow travelers and your tour managers at a festive farewell cocktail and dinner party.

Bid farewell to Europe and your newfound friends as you depart for the airport and your homeward bound or onward destination flight. 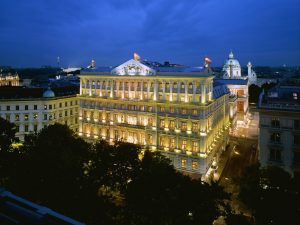 Indulge in Viennese splendor in your spacious Imperial Junior Suite in the historic five-star hotel whose prime location in the heart of Vienna has welcomed celebrities and royalty for almost 150 years.  Your marble bathroom features a shower and bathtub and Bvlgari amenities.  Try the landmark Restaurant OPUS for fine dining inspired by Austrian cuisine.  Or sample Viennese specialties at the legendary Cafe Imperial. 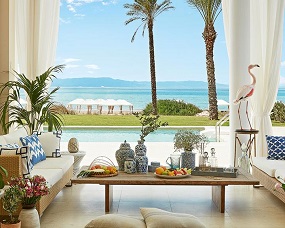 Nestled on palm-fringed shores along the Adriatic Coast, the Regent Porto Montenegro Hotel is a luxury retreat that blends grace and grandeur.  Your Sea-view one-bedroom suite awaits your arrival.  You can practically touch the Mediterranean from this suite, a seaside escape with picturesque panoramas visible from a private, furnished terrace. 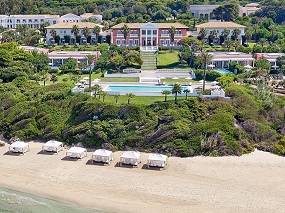 Your accommodations in a Villa Delos with Private Pool is waiting for you at Mandola Rosa, which sits within exquisite gardens perched above a beach extraordinaire.  Beloved by Kings & Queens its design reflects nostalgic Mediterranean palace homes.  It is Rose colored, after the almond trees that blossom in Ancient Olympia nearby. 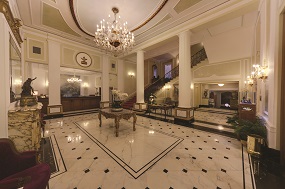 Step back into history at the five-star, century old luxury hotel that sits within a seminary designed for Cardinal Prospero Lambertini in 1740.  Your Junior Suite is uniquely decorated in 18th century French style with parquet floors and white marble bathroom. 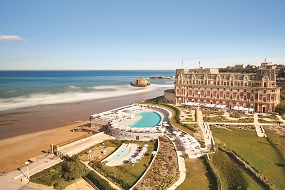 An Ocean View Jr. Suite in the legendary palatial hotel overlooking the Grande Plage on the Bay of Biscay is your home for the final three nights of your unforgettable journey.  The iconic hotel is the former Imperial Residence of Napoleon III and Empress Eugenia de Montijo and you’ll see their influence throughout the property. 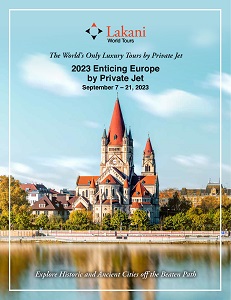